One secret to becoming a morning person

Like I mentioned last year, I’m interested in becoming a morning person. I am by nature a night-tinkerer, a fiddler and futzer, a midnight walker and a just-one-last-thing-er. And these night meanderings can last easily until 2, 3, 4am in the morning.

My logic goes something along these lines:

– I’m happier when I’m creating something — specifically, writing every day

– Because of kids and work obligations, I don’t really have time until after the kids are in bed

– at which point, I’m tired enough that I feel like consuming media, not creating it.

So the logical time to do this — when I have no other concurrent obligations — is early in the morning before anyone is awake.

For the last ten days I’ve started my writing schedule at 5:30am, and I’ve been faithfully churning out a thousand words a day. It feels fucking great — partially because I’ve really begun to like the project, but also because no matter what happens for the rest of the day, there’s this pillar of accomplishment there, first thing.

I’ve tried several times to become a morning person and failed — but now I believe I may have found a secret, back-door entrance to being a morning person. I’ll come right out with it, with no extra cost to you. It’s called: SIX HOURS OF JET LAG. Pretty awesome secret, no? All you have to do is have a nice long stay in Brazil (UTC/GMT -3 hours), and then try like hell to preserve that jet lag when you get back.

No, it’s not the cheapest way to becoming a morning person, but it works great and the weather is nice. I find I can barely keep my eyes open by about 9:30pm (3:30am in Rio de Janeiro), and that I’m awake somewhere between 4 and 5am, ready to go. And for whatever reason, months of non-productivity have suddenly given way to a wonderfully vigorous writing routine. Sweet.

I miss Salvador, though. 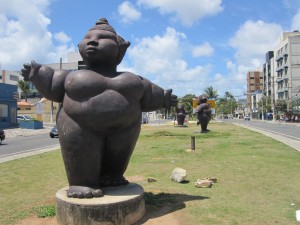