The city that is BEA

I was about as green as they get going into BEA and so it was a sensory-overload experience for me – the good kind, the 4-year-old-at-the-chocolate-factory kind, with a little bit of rabbit hole thrown in. Pretty much the first thing I did, after meeting my publisher in person (Gavin Grant! Kelly Link! Jedediah Berry!) for the first time was go sign books. It turns out, that in the cattle-to-the-slaughter lineup thing they do for authors (30 authors signing at once with their queues going out like tentacles, in 30 minute increments) I was stationed in the immediate vicinity of Judy Blume, Neil Gaimon and Brooke Shields. Holeee crap. Who’s this Parzybok character? The good thing about that is that my much shorter queue tentacle got spillage from these more popular attractions.

It also helped that Publisher’s Weekly did an article on the game/scavenger hunt that the Black Magic Insurance Agency (BMIA Staff: um, just me this time) put together among the small presses for the event which had a cover shot of my book. And so I had a healthy signing and it was a blast meeting people and giving them a copy  of the galley.

The scavenger hunt? It was super fun to plan – with a text-messaging, satellite component. Watch this space for more on that in the future. However, it was pretty sparsely attended. I didn’t really take into account that people were already working pretty hard at the event – their feet were tired, their brains were overtaxed. I wracked up the largest walking day since I’ve owned a pedometer.  A lot of people pulled a clue, said what a great idea it was, and then slogged on with their 900 pounds of books in tow. Next year I’m going to hire myself out as a book caddy as an act of compassion. At any rate, I’m looking forward to getting back to BMIA’s roots -ie:  doing a walking game in Portland somewhere. 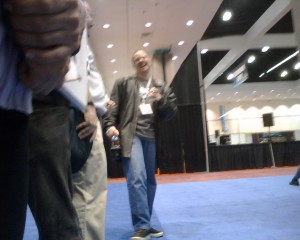 Among the many highlights of the show, one of them was getting books signed by other authors. I can vouch for John Scalzi’s claim that he stood in his own line (here’s a blurry cell-phone pic). I ran into Kelly Link in the lines and she introduced me to John and also to Sean Stewart. I am now the proud owner of one of the (relatively) few copies of Zoe’s Tale and Cathy’s Key out there… Awesome. I’m amazed at the publishing work that went into Cathy’s Key – with a pouch full of clues on the inside. So cool.

At any rate – BEA was awesome fun.