The apocalypse you don’t notice until you’re halfway through

I only learned last week that California is undergoing an epic drought of historic proportions. As a result they’re also under alert for extreme fire danger.

I joked with a friend that you never hear about droughts until they hit their 3rd and 4th years, after you’ve squandered years of planning and efficiency. What other disaster are you not aware of until you’ve been in it for a while?

That first year it’s: What a dry summer!

Then: Bad skiing this year, there’s no snow pack!

And by the time you’ve found that, for example, you’ve just experienced the driest year in recorded history (as California just did), you’re kicking yourself for not upping your efficiency and planning things out a bit better when it all started. Instead, governor’s are doing a politician’s rain dance: crossing their fingers, doing a lot of wishing, and saying “Governors can’t make it rain,” as governor Tom Brown felt important to point out last week.

“If we do manage to get a few decent storms, we could definitely get enough water to stave off the worst consequences of a really extreme water shortage,” he said. “But if we don’t, we’ve essentially lost the whole water year.”

– Daniel Swain of Stanford University who coined the term “Ridiculously Resilient Ridge” on his blog, weatherwest.com.

Meteorologists have fixed their attention on the scientific phenomenon they say is to blame for the emerging drought: a vast zone of high pressure in the atmosphere off the West Coast, nearly four miles high and 2,000 miles long, so stubborn that one researcher has dubbed it the “Ridiculously Resilient Ridge.” California Drought, What’s Causing It? San Jose Mercury News 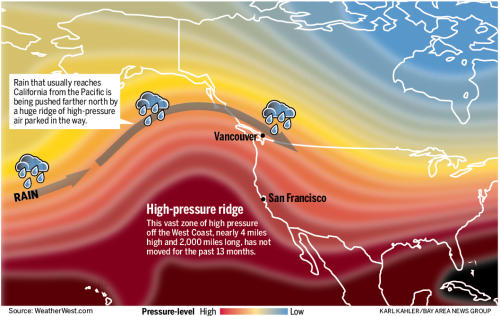 “We’ve had a few weather systems come through,” said Leslie Wanek, a meteorologist in Salt Lake City at the regional headquarters of the National Weather Service. “But it just keeps rebuilding there. It’s kind of a mystery about why. Why is the global atmospheric pattern stuck like this?”

A high pressure ridge, which diverts all wet weather north. It hasn’t moved for 13 months.

Some are surely wondering: Is this crisis the new normal? And when do you stop looking for a change in the weather, and start planning based on your current circumstances? And what apocalypse is already half over that we haven’t noticed yet?

*Note: My book Sherwood Nation, about a big drought, comes out this year. So I’ll occasionally post something up about drought issues, government hacking, enclaves, Robin Hood, and etc..